Up for your consideration a signed oil on canvas painting by Kostas Papanikolaou.

*Please contact us before purchasing to ensure the item is in stock.

Born in Rizovouni (Preveza) in 1959, he was an Athens School of Fine Arts student under the teaching of Yannis Moralis and Dimitris Mytaras (1979-1985). He featured his works for the very first time in Athens back in 1986; to date he has had seven solo shows as well as taken part in many group exhibitions. His works are included in private and public collections. He illustrated the following books: I Porfyrenia kai to mandolino tis by Fotini Frangkouli (Purpurella and her mandolin, 1995), Kymino kai kanella (Cumin and cinnamon, Collective Work, 1998), I fidogenniti vassilopoula kai alla paramythia by Maria Mamaligka (The snake-born princess and other stories, 1998) and To kaiki tou Thissiou kai alles istories gia mikrous kai megalous by Elias Venezis (The Thission boat and other stories for children and grown-ups, 2006). He resides and works in Athens. (1) 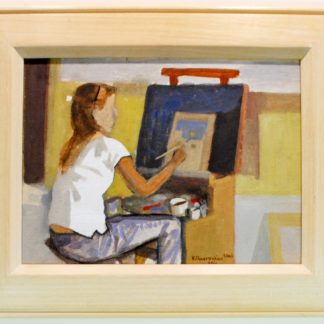