Up for your consideration an original Yannis Parmakelis decorative bronze sculpture/paper weight that depicts one of the most famous horses of antiquity, Bucephalus, the horse of Alexander the great. The sculpture is in excellent pre-owned condition. The words “ΒΟΥΚΕΦΑΛΑΣ ΚΑΙ ΑΛΕΞΑΝΔΡΟΣ 343-326 ΠΧ” (Bucephalus and Alexander 343-326 BC) are carved on it’s back.

Condition: Excellent pre-owned condition. Please take a careful look at the pictures for detailed condition and feel free to ask any questions that you may have. Please note that some light surface wear might not be visible in the pictures due to lighting.

Yannis Parmakelis was born on 27 June 1932 in Heraklio of Crete, Greece. He studied sculpture at the Athens School of Fine Arts as holder of the First State Scholarship, and was taught by the painter Yannis Moralis (foundation course) and the sculptor Yannis Pappas (sculpture workshops 1952-8). During his studies, Yannis Parmakelis won two prizes and five commendations on sculpture and drawing . In sculpture and drawing. He then continued his studies for a further three years (1961-1964) at the École des Beaux-Arts in Paris, on a grant from the State Scholarship Foundation. In Paris he studied with the sculptors Ossip Zadkine and Marc Couturier. During 1966 he taught at School of Athens as an assistant to Pappas. He also taught free drawing at the School of Interior Decorating of the Doxiadis Technologica Institute between 1968 and 1976.

Parmakelis’ art represents one of the most intelligent deviations from traditional sculpture, en route from classical naturalism, through dramatic expressionism, to industrial abstraction. His figurative sculptures are founded on preparatory drawings, the most beautiful of which he executes instantly using a match dipped in India ink. These drawings masterfully catch the essence of things, which he subsequently transposes into sculpture. This transference activates his vision, which inspires him to give up truth over feeling. In so doing, Parmakelis is expressionistic rather than descriptive [Athina Shina 1999]. His sculpture demonstrates the communication between the two poles of things; interior with exterior, closure with openness, and – in extension – past with present. Parmakelis’ figures have a ‘non-finito’ quality about them, ranging in variety from the hollows on the body to the absence altogether of a limb. This unfinished quality is so much at one with the essence of his subjects that the artist claims it to be true to their natural likeness. This effect endows his figures with an impressionistic bravura, which is identifiably his. Parmakelis’ work can be discerned into three distinct periods: the years from 1950 to 1967 represent his period of classical naturalism, where he explored the plastic possibilities of the human figure. In the turbulent years of dictatorship 1967-1974 Parmakelis indulged in a period of dramatic expressionism with his well-known series of Martyrs and Victims and his First of May sculptures (1973-1978). Finally, figuration was succeeded by an appetite for industrial abstraction in the period from 1978 to our days, with sculptures that have come to be known as ‘Mechanic’.

Parmakelis has had many personal exhibitions In Greece and abroad, and has taken part in numerous group exhibitions. He has officially represented Greece at the Alexandria Biennial in 1965, at the Contemporary Sculpture Expo of Musée Rodin in Paris in 1966, at the Bienal de São Paulo in Brazil in 1967, at the Greek Artists exhibition of Bucharest in 1969, at the 35th Biennale di Venezia in 1970, at the International Art Exhibition of Baukunst Galerie in Cologne in 1971, at the Budapest Biennial, at the Grande Palais of Paris in 1980, at the international Exhibition of Plastic Arts in Bucharest in 1983. In thirteen years (1975-1987) he has fashioned seventy medallions, including the series of Golden Democracy and Alexander The Great. He was the official representative sculptor for the European competition on the theme of the Euro. Parmakelis has been commissioned to decorate more than thirty public spaces (his sculptures are on display on Kifissias Avenue; by Hilton Hotel; by the Public School of Marousi; and by the Alpha Bank of Nea Erythrea). A major exhibition of monumental sculptures was displayed on the route from Korissia to Vourkari by the Municipality of Kea Island in 1999. Artworks of Yannis Parmakelis are kept at the following institutions: The American College of Greece; Baukunst Galerie of Cologne; Commercial Bank of Greece; Galleria Pagani of Milan; Goulandris Museum of Andros Island; John F. Costopoulos Foundation; National Gallery of Athens – Alexandros Soutzos Museum; Pieridis Art Gallery; Rhodes Art Gallery; and Vorres Museum of Paiania. 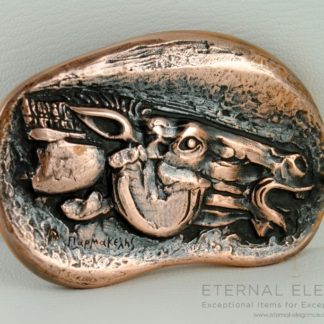