The painting is most attractive and entirely original. Very good condition, some minor paint loss in the top part. The frame is also in very good condition with some light wear. Signed bottom right.

* Please contact us before purchasing to ensure the item is in stock.

Stathis Livanis was born on 24 December 1941 on Ithaca Island, Greece. He took painting courses with Thalia Flora-Karavia in 1965-1968. He studied drawing in the workshop of Hans Meyer in 1960-1962. He studied stage design at Stavrakos Hellenic Cinema & Television School in Athens (1965-1968) under Marios Angelopoulos.

Stathis Livanis is currently based in both Paris and Athens. http://www.acgart.gr/ACG-COLLECTION/ARTISTS/L/LivS/LivS-bio.htm 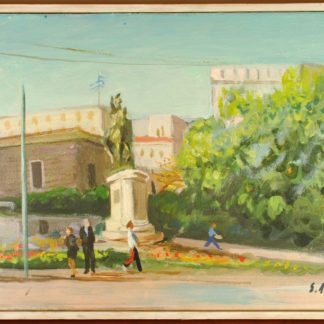